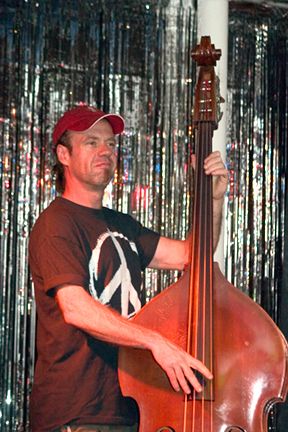 :sBorn in Austin, Texas, Ben Palmer has been playing guitar and bass for some 30 years. He's performed around the United States and Europe with his own bands and with other talented musicians.

He now lives in Durham, NC. He is known in the Triangle area for his live performances and for helping students progress rapidly in private guitar and bass lessons. Ben enjoys teaching his students songs they enjoy listening to and in the process, help them understand the way music works.

Ben plays bass, both upright and electric, and sousaphone with a variety of ensembles in a broad range of styles, including straight-ahead jazz, blues, R+B, rock, funk, Latin, theater, singer/songwriter, and bluegrass. He has recorded more than 30 CDs. He has been spotted playing drums on occasion. Ben has served as MC many times at the Eno Festival and periodically does voice-over work, most recently for Research Triangle Institute. A current project is Boneslinger with Dave Wright of Countdown Quartet.

Ben plays guitar in several groups as well. His newest group is an organ trio, dotCombo, with Doug Largent and Todd Proctor. "The band was born from my jam session. I had been playing it on bass and hiring a chord player. When I asked Doug to play it on organ, he said he would rather cover the bass (he doesn't aim for any other comping with his left hand), so I decided to just bring the archtop instead" Other gigs have surfaced, Sullivans, Brassa, Lafayyete Village, East 54, Eno Fest, and several private gigs at the Hunt Library, Centenial Campus and Govenors Club.

Ben is the bassist with Jason Damico and The New Blue, a trio with Kevin Boxell on drums. Jason is a young guitarist and singer making a big splash on the blues scene.

He's often on the bandstand with pianists Frank Longino, Al Strong, and Guillo Carrias. to name a few.  He usually runs out of fingers counting the bands he has gigs with. Ben is also always up for new projects as well. "the variety of my gigs keeps the interest fresh...keeps me on my toes"

"I"ve also had the great joy of playing with my son and daughter, Max and Genevieve. (on drums and bass respectively) They have become an awesome rhythm section. I didn't pressure them, they did it on their own term. They both have their own projects too, but they make a great dotCombo."

Ben played the Montreux Jazz Festival in Switzerland every year between 2000 and 2004. There, he hosted and attended jam sessions with local and international musicians and performed on stage with Peter Cincotti. George Benson. Jon Anderson of Yes sat in on an impromptu street jam session. Many other main stage musicians sat in on Ben's street performing.

Ben's goals include performing at music festivals, domestic and foreign, as well as local concerts and private functions. He is currently seeking new students interested in jazz on the upright bass, and as always, guitar students at any level.

Besides music, Ben has a decidedly green perspective. He uses led bulbs in every socket and brags about his $20 electric bill. He drives a jetta waggon on SVO. Ben is an avid gardener and urges people to shop (and eat) locally. He is member number 87 of the Durham Central Market . You will be offered fresh figs if you see Ben over the summer. As the smallest possible company, one person, Ben is walking the walk against globalization.

He has played every Location of The Cats Cradle, Centerfest, The Durham Blues Festival, Apple Chill, Festifall, The Montreux Jazz Festival, Artsplosure, The Fort Fisher Seafood and Jazz Festival, Hillsboro  Hog Day, Festival for the Eno, Greensboro Street Scene (that's all I could think of)


Ben has hosted jam sessions at The Cave, Seventh Street, The Blue Bayou, The Bread and Board, The Lounge, Francesca's, Ooh La Latte,  Siren's Lounge, The Beyu Caffe, the Blue Note Grill, and now the Tavern, 1900 w Markham in Durham.